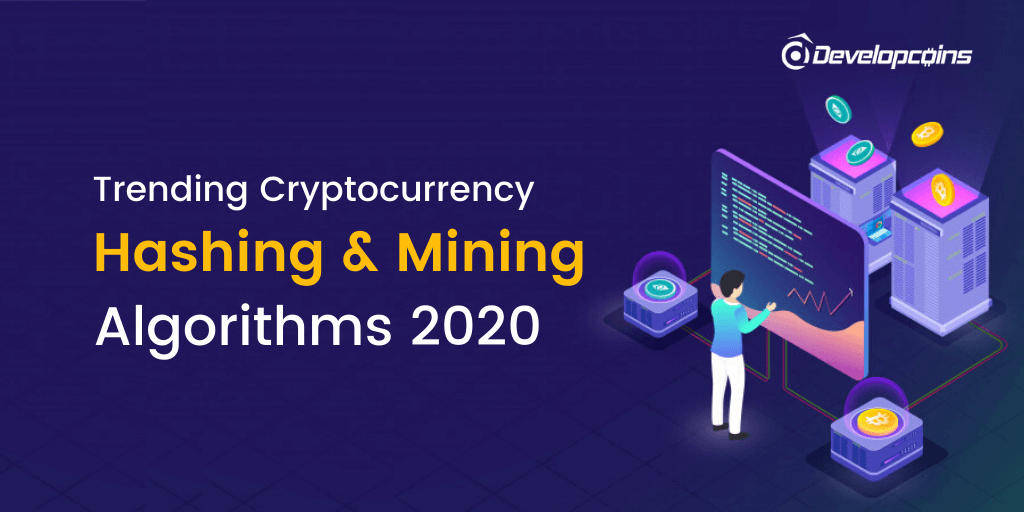 In the cryptocurrency world, there is one important question almost everyone has searched in Google at some point. It’s the question that makes crypto beginners sit up all day and night, scrolling down multiple web pages finding for an answer. The question that has started a lot of crypto & blockchain wars, and yet, has managed to stay open.

That question is, what is the Cryptocurrency Hashing Algorithms?

Before that get some idea about What is Cryptocurrency or Fiat currency?

A cryptocurrency is a digital currency that runs in a decentralized manner and uses encryption. In simple words, no central bank or government regulates this currency (it's decentralized). It is digital in that it is virtual, not like physical money. And it uses security features in order to avoid counterfeiters, secure transactions, and generate the units of currency.

The validity of each crypto coins is provided by a blockchain. A blockchain is a frequently growing list of records, called blocks, which are linked and secured using cryptography.

Now, you might have got the basic idea of what a cryptocurrency is. Cryptocurrencies make use of different algorithms named as hashing algorithms.

Cryptocurrencies algorithms and hash functions are used to secure blockchain transactions and are a necessary component of the crypto mining process.

In this Blog, we going to explain in detail about the Top Cryptocurrency Hashing Algorithms and How Developcoins works with Cryptocurrency Development platforms using trendy hashing algorithms.

In this article covered by the below topics:

A hash is nothing but it is a function that converts an input of letters and numbers into an encrypted output of a fixed length. A hash is created using an algorithm and is important to blockchain management in cryptocurrency.

What is a Cryptocurrency Hashing Algorithm?

Cryptocurrency algorithm or hashing algorithm – is a mechanism that encrypts virtual currency or digital currency. Some algorithms can be used in multiple cryptocurrencies because the number of cryptocurrencies today exceeds the number of existing algorithms. Miners decrypt this algorithm (seek hash). If the decryption is successful the new block is generated. This block stores records about transactions carried out in the system and the cryptocurrency blockchain expands. As a result, miners provide blockchain’s work and get rewards. Algorithm decryption turns the body of random data into a primary succession of data that grants cryptocurrency operation. The result of computing operations that miners carry out is called hash.

The hashing algorithm is a Cryptographic hash function, the mathematical algorithm that maps data of arbitrary size to a hash of a fixed size. Hashing algorithm being used for digital signatures and authentication.

Explore more from here - What are Blockchain Consensus Algorithms & Types of Consensus Mechanism?

How Does Hashing Work?

Blockchains hash every transaction before grouping them together into blocks. Hash pointers link each block to its prior, by holding a hash of the data in the previous block. Because every block links to its prior, data in the blockchain is immutable. The hashing function means that a change in any transaction will produce a wholly different hash, which will alter the hashes of all subsequent blocks. To propagate a change across the blockchain, 51% of the network would have to agree to it. Hence, the term “51% attack”.

Cryptography is a complex and detailed methodical study of part of the material world, that reaches way as well as the scope of the blockchain technology.

Here are the different types of cryptocurrency hashing algorithms like:

Here we will explain some of the important hashing algorithms which is used in many Cryptocurrencies:

SHA algorithm was initially developed by the US National Security Agency in 2002. In 2009, Proof-of-Work SHA256 was implemented in Bitcoin, and later in other similar cryptocurrencies.

SHA256 algorithm creates a 256-bit hash. The speed and efficiency of decoding based on the processing power of a miner. The possibility of searching hash equals the ratio of miner`s processing power to the power of the whole network. This is why the special mining equipment to improve the power appeared – ASIC-miners.

Want to create your own altcoin like Bitcoin? Consult with our experts and get the best solutions for altcoin development.

ASIC in fact monopolized Bitcoin mining and made it impossible or at least rather difficult for a wide range of users to mine BTC.

The SHA -256 cryptocurrency algorithm is used to mine:

Explore more from here - What is SHA-256? or SHA-256 Algorithm  Development Process

Scrypt is one of the most popular PoW hashing algorithms, along with SHA256. It is currently used in Litecoin, Dogecoin, and other cryptocurrencies. This algorithm is, in fact, more complex, as it requires a lot of memory, available on the mining equipment. That was a big problem for ASIC-miners.

Scrypt aimed to prevent mining monopolization by ASIC, and at first, it really worked out. Today ASIC equipment is also used to mine scrypt-algorithm cryptocurrency, which makes the process more centralized and less available.

Scrypt’s hash rate is measured by KH/s: kilohashes per second, or one thousand hash computations per second.

The Scrypt cryptocurrency algorithm is used to mine:

CryptoNight is a proof-of-work algorithm. It is developed to be suitable for ordinary computer’s CPU, but currently, there are no special-purpose devices available for mining.

CryptoNight was initially implemented in the CryptoNote codebase. CryptoNight can only be CPU-mined for the time being.

Unlike the Scrypt algorithm, the Cryptonight algorithm depends on all the previous blocks for each new block.

The Cryptonight cryptocurrency algorithm is used to mine:

The algorithm dagger-Hashimoto was enabled to mine Ethereum (and later Ethereum Classic). It was related to scrypt, but needed even more available memory. That protected Ethereum mining from ASIC. Then the algorithm was advanced and called Ethash. Users have an opportunity to mine Ethereum using graphics cards.  Ethash algorithm hash rate is measured by Mega-hashes per second (MH/s).

Ethash is used for mining purposes only and it is using a Proof of Work hashing algorithm developed specifically for and by Ethereum (ETH). The primary reason for the creation of the Ethash PoW function is to resist ASIC machines. Yes, Ethash is ASIC resistant and it is memory intensive algorithm that can be mined only using GPU.

The X11 algorithm requires only 30% less wattage because it is 35 to 50% cooler and it is more energy efficient then Scrypt, this is its major advantage, that’s why it is preferred over Scrypt. Its hash rate is measured by Mega-hashes per second (MH/s).

The X11 cryptocurrency algorithm is used to mine:

PIVX is also energy efficient than other Proof of Work (PoW) crypto coins like Bitcoin due to the PoS consensus algorithms. There is also a network of masternodes that manage the PIVX blockchain. Masternodes guide the network and can vote on decisions regarding the future development of the crypto coin. There is also self-funding storage that releases funds for the new development of the PIVX blockchain.

As a leading Cryptocurrency Development Company, Developcoins is the perfect place for the business people to create a new crypto coin. We also provide mining pool services for your new digital currency creation.

With the support of Developcoins, you can extend your Crypto business plan and also create a New crypto coin business solution with the trending features by the built-in security mechanisms. Still, having doubts about our cryptocurrency development services & solution? No problem!... Just feel free to talk to our Developcoins experts!

Create your new custom Crypto Coin with the trendy algorithm!