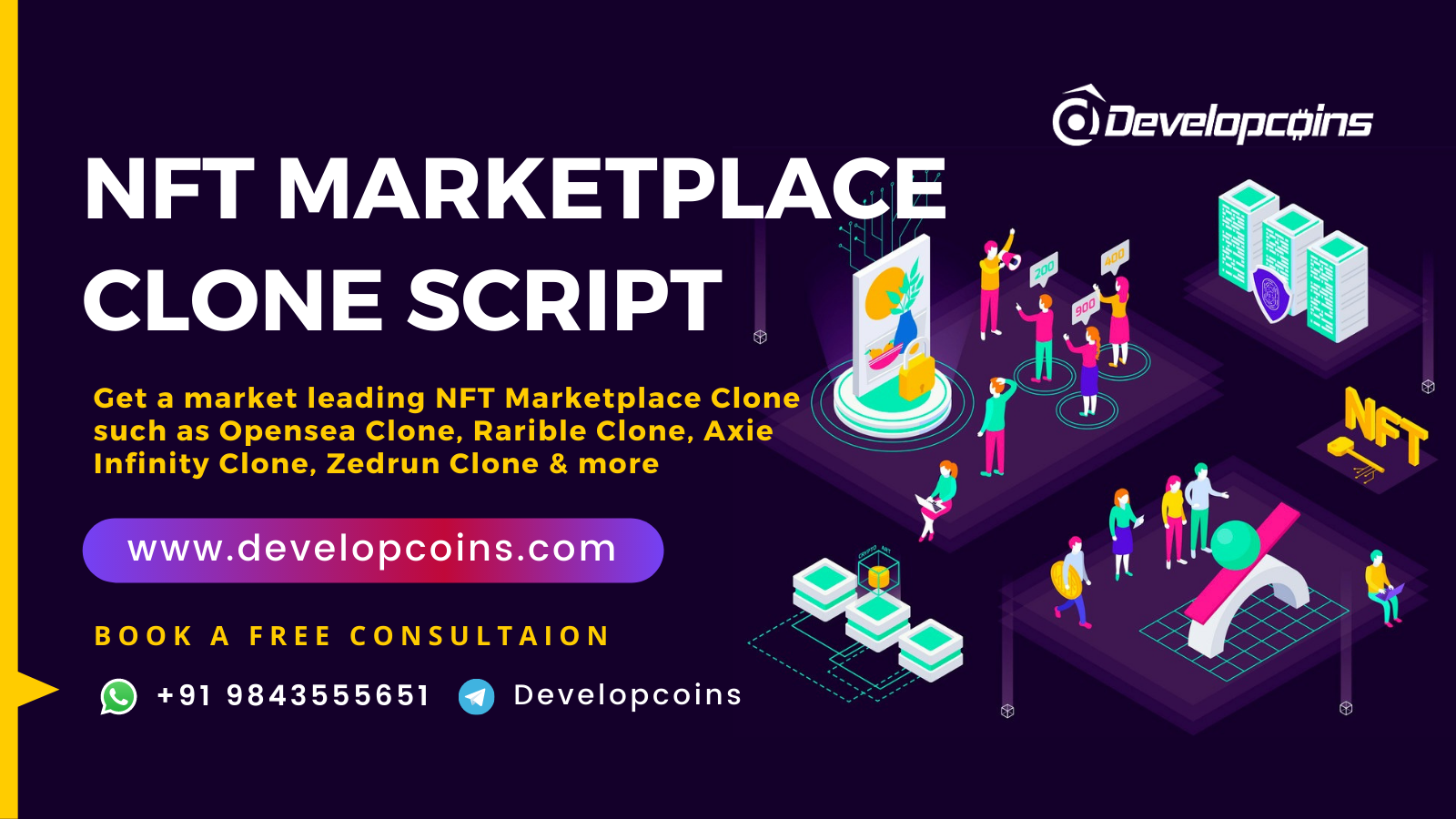 NFT Marketplace Clone Development will refer to replacing the existing NFT marketplace to offer some optional benefits to the crypto enthusiastic and also it helps to improve some advanced features. NFT market will reach a vast number of users in the recent days, so there are a large number of platforms are planning to launch their own NFT Marketplace like Opensea, Rariable and so on, By this article, we have to see about Top 10 Marketplace Clone and their benefits

Before entering the topics, let’s see about the quick definition of NFT Marketplace

What is NFT Marketplace?

It is a type of decentralized platform that allows the user to trade store their NFT’s and it also refers to the million-dollar revenue system developed over a different chain by a user requirement which includes Tron, Ethereum, Binance Smart Chain and so on. It provides a strong ownership right and also gives security to the holders. If you are an NFT token holder, it allows you to trade in multiple marketplaces, you can also have the ability to bid to sell tokens in the market.

NFT Marketplace Clone Script Which is More Popular in the Market!

OpenSea Clone Script is a ready-made script that helps to launch your own  P2P NFT marketplace for rare digital items & crypto-collectibles like OpenSea. It allows t allows trading in cryptos or collectibles in different platforms to implement the functionalities which perform buy, bid, and sell of crypto-collectibles based on requirements along with different modes of selling. Our OpenSea Clone is integrated with the latest features which attract more users worldwide.

Features of Our Opensea clone scripts are:-

Rarible Clone is a ready-made NFT platform similar to Rarible, Our Rarible clone script is integrated with more features and functionalities that executes the non-fungible tokens with uniqueness and allow blockchain-fueled digital currencies like game items, collectibles, domain authorities, digital arts, event tickets, and also can be traded off via non-fungible tokens (NFTs). Rarible can attract a large number of investors and gain huge revenue.

Features of Our Rarible clone scripts are:-

Polkacity Clone is a type of virtual currency investment platform and it is a fully automated open-sourced decentralized platform that helps to launch your own Polkacity NFT Marketplace platform. Users can access the virtual city and invest their money in the assets like virtual taxis, hotels and all others in one place and it gives passive income without any complex processes. POLC is the native token of Polkacity and it was created on ERC20.  Our Polkacity Clone will help you to Kickstart a decentralized and smart contract-based platform that helps you to gain a universal user base.

GhostMarket Clone is a pre-built software solution of Cross-chain NFT Marketplace like  Ghost Market, it allows you to trade collectibles on NEO blockchain and Phantasma. Phantasma is nothing but another type of blockchain network and the logo was similar to a ghost, so it was called Ghost Market.  it was created with multiple features and it is a ready-made script in the NFT Market that can be deployed quickly, Our Ghost Market Clone was customized and personalized according to your needs.

Decentraland Clone is a type of ready-made Ethereum based virtual platform, where user can use to build, own and also monetize their virtual assets, in this platform user can buy land in the virtual world and it execute the functionalities by making use of an ERC 721 powered token, this token will allow the users to have fractional ownership and also it gives a 3D experience to the users. You can purchase land and use them to build your own marketplaces, environment, and applications.

Gods Unchained Clone is a ready-made digital trading platform, where gamers can exchange their collectible cards easily. All the transactions and trades can be recorded on the public distributed ledger, It offers different like of virtual assets like weapons, skins and dresses. God Unchained Clone has a specific ETh value and it can be converted easily into USD. This platform is highly beneficial for game developers, players and also for blockchain developers.

Sandbox clone is a ready-made clone that was similar to the sandbox where the users can buy virtual land, estate, apart from the land users can also buy any product from the sandbox metaverse. Sandbox clone is a type of common unity drive platform where the players or creators can monetize their virtual assets. SAND is their native token and it is the type of utility token  that allows you to buy and sell Lands and Assets in the sandbox metaverse

NBA Top Shot Clone is one of the famous and trending ones in the NFT Marketplace platform for sports to promote player trump cards, match clips and signature move of the national basketball association tournament, which was similar to NBA Top Shot. NBA Top Shot Clone can be available in two modes based on the user suggested specification and also it can provide a seamless experience to the users and it gives a golden opportunity to engage with your favorite team more closely.

Get a free demo for NFT Marketplace Clone here!