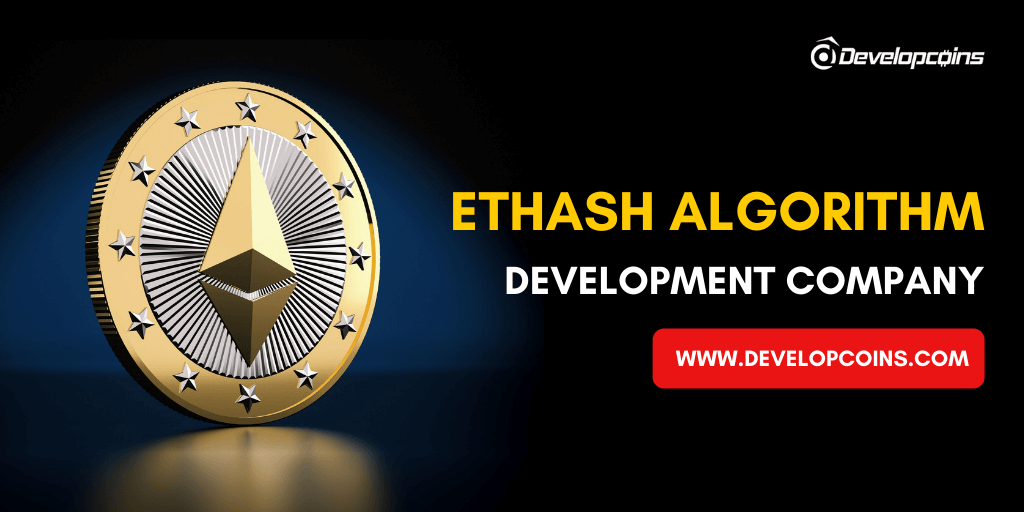 Developcoins - A leading cryptocurrency development company that offers complete cryptocurrency mining algorithm based development services and solutions around the world, let us explain one of the most trending mining concept and how it plays a major role in crypto mining sectors.

You have already heard about SHA–256, Scrypt, X11 algorithm, the most popular of them. With more and more altcoins getting created every day, the number of mining algorithms used is also growing. Today, there is numerous algorithm used in mining various cryptocurrencies, For those of you who still have no clear picture of Ethash Algorithm, we decided to make a clear introduction to Ethash algorithms and how its works, differentiate between SHA-256and Ethash, and possible profits. Eventually, we will try to find out if you should try to create an ‘Ethash based crypto coins’ at this right time for the cryptocurrency market.

Ethereum, which is not just a platform but a programming language is one of the biggest most well-established decentralized platforms. The Ethereum platform allows Smart Contracts and Decentralized Applications (DApps) to be rooted and power without a break, fraud, control or prying from a third party or middleman. Ethereum known as Ether is used as a cryptocurrency exchange and can be used to run high-end applications and can go as far as means of reward for work done. In the last couple of years, Ethereum has offered as a platform to develop dAPPs and games.

At present, Ethereum blockchain is using proof-of-work consensus algorithms and that allows regular computers and a big opportunity to mine blocks. It is the latest version of the Dagger-Hashimoto algorithm and is called Ethash

Ethereum - It has implemented the Keccak and Ethash algorithms. The target areas for these two primary methods are address compression, block connection, and mining.

What is the Keccak Algorithm?

Since the Keccak and Ethash algorithms have different use cases, they are used in different systems. The primary hash algorithm in Ethereum is called Keccak, it collects the data and extends the result basing on all already used processed data units. It gives up powerful flexibility and may be treated as pseudorandomness. Keccak is used in multiple areas, except for mining.

What is Ethash Algorithm?

Ethash is used for mining purposes only and it is using a Proof of Work hashing algorithm developed specifically for and by Ethereum (ETH). The primary reason for the creation of the Ethash PoW function is to resist ASIC machines. Yes, Ethash is ASIC resistant and it is memory intensive algorithm that can be mined only using GPU.

What is the Dagger-Hashimoto method?

Dagger Hashimoto is a considered spec for the mining algorithm for Ethereum and builds on two primary key pieces of prior work:

Algorithm by Vitalik Buterin, Dagger was meant to be an alternative to existing memory-hard algorithms like Scrypt, which are memory-hard but are also very tough to verify when their memory-hardness is raised to absolutely secure levels. Yet, Dagger was verified to be exposed to shared memory hardware acceleration by Sergio Lerner and was then released in favor of another route of research.

​Algorithm by Thaddeus Dryja which means to achieve ASIC resistance by being IO-bound, ie. making memory reads the reducing factor in the mining process. Hashimoto uses the blockchain as an origin of data, concurrently satisfying.

Dagger Hashimoto’s - It hash rate is measured by MH/s: mega hashes per sec, or one million hash computations per second.

How Does Ethash Algorithms Works on Ethereum Mining Concept?

The Ethash mining algorithm can be worked both with the CPU and GPU. Ethash-based cryptocurrencies vary in their demands on the mining, so here Ethereum will be used as an example as the most familiar of Ethash utilization and other cryptos often use the same mining software like it. To start mining of ETH one will require a fully concur cryptocurrency client that is allowed for mining and at least one Ethereum history. Other Ethash algorithm-based cryptocurrencies need a wallet or an account in their specific networks.

CPU mining of Ethash-based cryptos is now getting more profitable due to the almost two times more dynamic mining efficiency of GPU miners. However, CPU mining can be used for first mining attempts or in the reason of creating some amount of crypto coins to power smart contracts or trying cryptocurrency transactions within a network. Ethereum CPU mining is worked with ETH client named geth. Geth is a program that interconnects the Ethereum network with the gear of the miner. Mined coins will be sent exactly to the miner's coinbase address within a network.

GPU mining is the best viable option for Ethash. But, it is important to recognize that Ethash is memory-hard and require at least 1-2 GB of RAM on each GPU used. AMD GPUs usually show the best results than NVidia products of the same category, ASICs and FPGAs (Field-Programmable Gate Arrays) that are typically capable of Ethash mining are inefficient in similarity with GPUs and are depressed both by the community and by the developers. In order to start GPU mining one needs to download Ethminer - Ethash miner created by the Ethereum team and advisable to work with every Ethash-based crypto that didn’t specifically block this opportunity.

The hash value for the crypto will be assigned based on availability and possibility.

The entire technical package of the brand new crypto-based on the Ethash algorithm will be made with all the specifications and functionalities.

The wallet will be created which supports all platforms and devices

It will be made ready for tracking the transaction of Coin

Benefits Of Choosing Us As Your Ethash Algorithm Development Company

Contact Developcoins now for the development of a cryptocurrency to launch your own crypto coin using the Ethash algorithm!

Get a free quote from Developcoins Now !!