What is Lightning Network? A Step-By-Step Guide for Beginners! 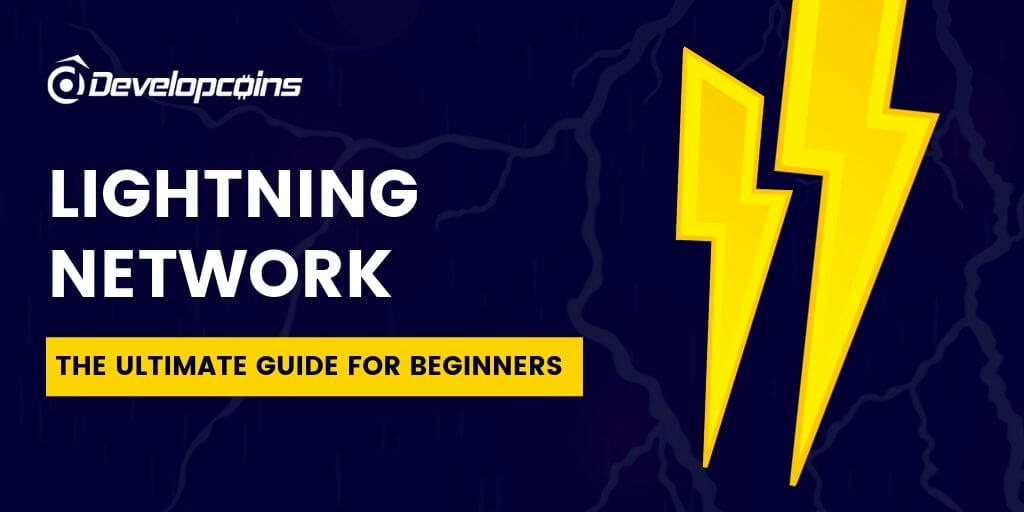 You may have heard the term “Lightning Network” before, in reference to Bitcoin and other cryptocurrencies. For the uninitiated, the term might seem abstract with little actual meaning on the surface. However, Lightning Network is an Important element of cryptocurrencies — because it’s a second layer which aims to solve Bitcoin’s scalability problem.

If you are new to Lightning Network, read this beginner guide on the basics to get yourself started.

Here I’ll be talking about all there is to know about the Lighting Network. So, let’s see what this beginners guide will cover on the Lightning Network.

What is Exactly Lightning Network? 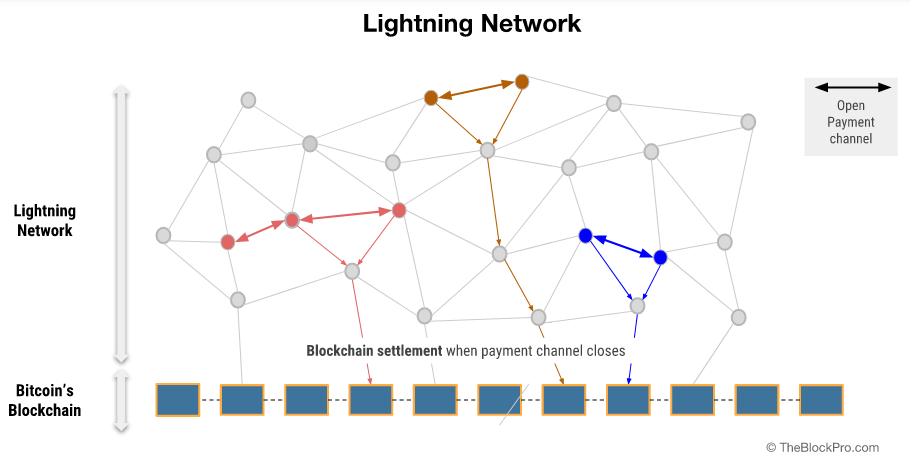 While Bitcoin provides a solution to many of the problems given by our current economic system, it still has some difficulty. One of its biggest limitations concerns the speed and price of transactions, exclusively during busy times. These limitations prevent it from becoming a true medium of exchange for day to day microtransactions, like cash or credit card.

The lightning network was developed to solve just that. Created as a second layer over the bitcoin network, it allows the user to transfer Bitcoin between one another instantly and without any fees. This is made feasible by creating payment channels between two users. Payments can also be made between users that are connected indirectly, through network channels.

The concept of the Lightning network is that transacting and settling would be done off-blockchain, so the transaction fees are very low and it is a decentralized network using smart contract functionality in the blockchain to enable instant payments across a network of participants.

Who developed the Lightning Network?

The Lightning network was created by two developers: Joseph Poon and Thaddeus Dryja, and alpha-launched in 2017 but has since evolved into a community effort with third-party individuals and even companies providing to specifications and implementations.

How does the Lightning Network work?

Discover how lightning network work, and how they can help your instant transaction, explained in a simple way you can actually understand.

The Lightning Network is dependent upon the underlying technology of the blockchain. By using real Bitcoin/blockchain transactions and using its native smart-contract scripting language, it is possible to create a secure network of participants who are able to transact at high volume and high speed.

This technology is using bidirectional payment channels. Two users freeze the same amount in the Blockchain network to open a payment channel between each other and then use debt receipts among themselves to perform a transaction.

Imagine that Frank and Alice freeze 10 BTC, each one freezes 5 BTC. This deposit is added to the Blockchain and the payment channel is considered an open between Frank and Alice. Now, if Frank wants to send to Alice 2 BTC, he requires to transfer the ownership of 2 BTC with 3 BTC left. Alice, in turn, will get 2 BTC from Frank and will own 7 BTC. Either Frank or Alice may close the channel, and the result will be recorded in the Blockchain, but if they plan to transfer more money to each other, the channel is to leave open.

Transactions are going instantly and with the smaller fee due to the fact that each operation doesn't need a separate entry in the main Blockchain network, but this technology has its full power when many more channels are joined into one common Lightning Network. Likewise, the channel is open for payments between Frank and Alice, and another channel is open between other two participants, so Frank can send to any participant, without having a direct open channel between them.

Bitcoin Lightning Network Protocol is implemented on top of Plasma chain, allowing anyone to be able to send/receive tokens to/from anyone on any Plasma chain or root chain.

Scalability - It’s a long-term solution to the Bitcoin or other cryptocurrency scalability problem. Like Bitcoin Cash – have made changes to Bitcoin which they think solve the scalability problem. However, their solutions tend to be short term. If the network is ever going to be truly scalable, then it will come in the form of a project like the Lightning network. Few other completed solutions are big enough to fix the problem completely.

Outstanding Anonymity – It will be more difficult to find our consumption habits or, by choice, to match a participant to their wallet address because not all transactions are recorded on the main blockchain network.

Lower Fee – There are two various types of costs. The first is the commission cost. Lightning fees will be negligible compared to the current fees. The second type is reducing congestion on the main network and reducing its size in the long run.

Micropayments –  The Lightning network could solve Bitcoin’s second biggest problem which is high fees. When it was developed, Bitcoin promised nano transactions and low or no fees. So far, it hasn’t delivered. But with help the Lightning network it might be able to in the near future!

The Lightning network provides users more control. The main Bitcoin blockchain network is largely controlled by miners. Miners use very powerful and expensive tools to complete the tasks involved in processing transactions. On the Lightning network, nodes can be run by anyone; on laptops, home PCs and mobile phones. Bitcoin was designed to include anyone and that’s completely what the Lightning network wants to do.

1. At this time the Bitcoin Lightning Network is on a beginning stage and hence huge important transactions are still better to carry out in the main Bitcoin Blockchain network.

2.P2P protocol handle in Lightning Network needs both peers online in order to complete a transaction. Should one get offline, the broadcasting stops suddenly.

3. You can’t top up the channel from the mainnet. It’s called "Channel depletion", a situation showing when the first node transfers all the funds of the channel to the second node. Then such a channel can work only in one path direction, hence sending funds from the first node is impossible unless the second one transfers part of the funds back, or the two nodes will have to open a new payment channel.

In March 2018, Lightning Labs launched Lightning Charge, a tool for developers to build lApps. LApps are Lightning applications such as instant & fast payment services which will be based on the Lightning network.

Next big one is the banks and other large organizations will use Charge to create lApps that their millions of users will use. One of the first lApps to become more popular is Poketoshi, a game where users bid to control famous Pokemon characters with Lightning network payments!

Where is Lightning Network used?

At present, Lightning Network has already highly reduced the load on the Bitcoin network. It’s notable that this technology can work not only on the Bitcoin Blockchain but also on many other cryptocurrencies: Stellar, Ethereum, Zcash, Litecoin, Tron, EOS and XRP. XRP (Ripple) & Litecoin has already launched Lightning Network on its mainnet, and Stellar is working on it right now, because the LN technology improves the work of the whole Blockchain by developing the network more scalable, increasing transaction speed and lowering the fees even for those who don't use this technology.

“Using the Lightning network the Blockchain can reach the level of such payment systems as VISA or MasterCard”. - Christian Decker (The Blockstream engineer)

The Lightning network will run on any platform that supports smart contracts and multi-signature wallets. This means that we could see Lightning networks providing second layer solutions to platforms like Ethereum, Zcash in the near future.

The search and analysis engine, 1ml (https://1ml.com/), lists more than 8,365 nodes with over 37,352 payment channels operating on the Lightning network today.

This chart shows cumulative bitcoin capacity across all channels. Lightning nodes open payment channels with each other that are funded with bitcoin. When transactions are made across those channels, the channel balance is reflected without having to broadcast a transaction on a chain. This creates a second layer on top of the bitcoin network that expands its capabilities.

Lightning Network made us look at the cryptocurrency world in an entirely new way. If you think about it, our whole cryptocurrency world and how we manage instant transaction is going to change. We could finally imagine a crypto world that is wholly transaction free of technological overlords. But it’s not going to happen overnight. Users will need quite an amount of time to discover the entire technology aspects. It goes without saying that, Lightning network is going to change the way. The human mind tends to reject the changes.

For example, if you consider the blockchain technology, you will notice that it takes some time to verify the transaction and record it to the blocks. As Lightning network to going to remove the necessity of verification and other transaction fees, we think it might take even lower transaction fee this time.

But who could predict the future? Blockchain was such a sci-fi back in the earlier days. But even most of the business entrepreneur these days use blockchain technology to revamp their business and get back double ROI.

So, how the lightning network is going to change the crypto world? How is it going to revamp our daily life? Which are the scenarios that will change extremely?

These questions are pretty common to come to our minds. Don’t worry mate! We will answer all the problems that have been bugging your mind regarding the issue.

At present, we are working for the crypto-coin project based on Lightning Network.

If you want to explore the latest Lightning Network trends from technology experts?  Contact us here!