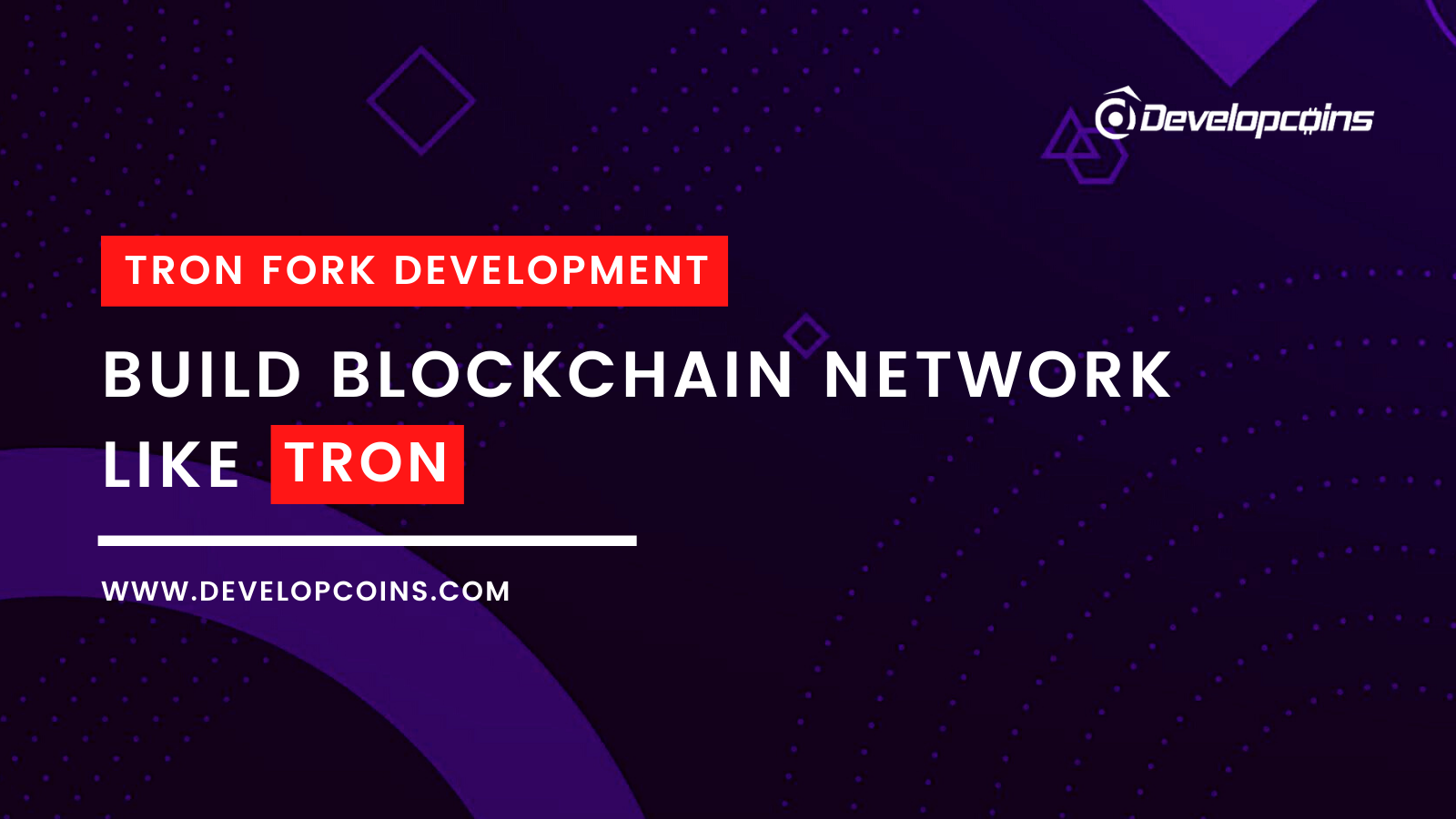 In this digitalized era, the most searched term on the Internet today, Everything about TRON because of its popularity. TRON is nothing but a blockchain like Ethereum, EOS and more. It also has some specific protocols, blockchain explorer and a native token which have been introduced with a specific intention. TRON blockchain is specially made to empower artists and content creators all around the world.

In the competitive world, clone a product or forking the project is trending one. Most of the crypto enthusiast have don’t have a clear idea about this forking concept and also it is much better to hear it from industry experts. By this article, we will talk about how to create or fork a blockchain platform like Tron?

Before entering into the topic, if you are a beginner for Tron, let’s see about the short definition about Tron:

Tron is a blockchain platform specially launched for a decentralized ecosystem, it mainly focuses on enlarging the market of decentralized applications by making it easier to develop and deploy them, The Tron was launched on 2018 and crypto token of the Tron blockchain network. TRON’s native token was called as a TRX. TRON can use a consensus mechanism that is known as delegated Proof-Of-Stake (POS) it helps to secure the TRON network as more secured.

TRON has divided its goal into Four phases which includes:-

What is Tron Forks?

Tron presents itself as a competitor to Ethereum for launching crypto tokens and other offerings to increase its appeal to institutional users. Fork concept is used to improve some of the traits like privacy, scalability and much more. Creating a new Tron (TRX) is a complicated task to overcome that, technology has made the things much easier with a Tron Fork, it is so easy to build a blockchain platform with a Tron Fork. Tron source code can give birth to create new crypto-like TRON. Tron as needed to create a solution that would scale as more users bought and sold the product, that’s why the forks came in.

Tron Forks allows for a different development structure and experiment within the TRON platform without compromising by the original Tron Blockchain Platform, these forks can be developed on larger blocks and they result in a brand new platform.

There are two types of forks based on the willingness of blocks they are:-

Hard Forks are new versions that are completely split up from the original version this means that nodes of the newest version of blockchain have no longer to accept the older version of the blockchain, it creates a permanent separation. There are many examples of a Hard fork. One well-known instance in the hard fork is bitcoin cash this currency came into existence in 2017 where developers modified bitcoin’s existing code to develop a new protocol.

Popular Token which was built under Tron Blockchain Network:-

Tron network allows users to create or issue tokens on its own blockchain network, these types of tokens can be used as Dapps. TRC-10 and TRC-20 is a technical token standard build under the TRON blockchain network. TRC-10 is already used in high profile projects like BitTorrent Token (BTT) the largest decentralized file-sharing protocol with around 100 million users.

TRC20 token standard makes it convenient for everyone to make conditional & instant transactions and it is nearly similar to ERC-20 standard.

Popular Gaming Platforms which have been built on Tron Blockchain network:-

Most of the sports betting & I-gaming crypto platform is built on Tron blockchain especially for BetFury. It is the First i-Gaming platform which was built under the Tron network.

Tron became the finest blockchain network for game developers to start working on it. It will manage up to 2000 transactions per second. BetFury is i - gaming platform with a BTC dividends pool which was built under Tron Blockchain network. They also provide in-house games such as Dice, Circle, Plinko, live casino and more.

Popular MLM Platforms which have been built on Tron Blockchain network:-

MLM - Multi-level marketing can be widely used by the business industry it was mainly used by start-up peoples who want to start their business from scratch by approaching the customers directly in person to sell the product. Behind the success of the smart contract, most of the business people are interested to integrate smart contracts in many MLM business because smart contract-based MLM based business remove third parties activities and make more transparency. Smart contract based MLM on Tron offer N number of benefits which is like

Tron smart contract MLM Software is a decentralized MLM software that helps to build MLM platform on the Tron network and It offers high scalability for all Dapps in the TRON environment.

We hope that now you all are cleared about what is TRON and their N number of business models which have to create more attention in the crypto market. So this is the right time to start your crypto business in the right platform. If you want to create a blockchain like Tron or looking for Tron fork development company then you are in the right place!

As a leading Cryptocurrency Development & Blockchain Development Company, Developcoins provide a complete blockchain fork development services by industry experts because we have a long-lasting experience in cryptocurrency as well as the blockchain technology that help us to provides outstanding forking services to create or fork a blockchain platform like Tron as per your business needs!

Want to know more about Tron or want to create or fork a blockchain platform like Tron? then feel free to consult with our experts through Whatsapp | Telegram | Skype