How to Write Upgradable Smart Contract in Vyper? 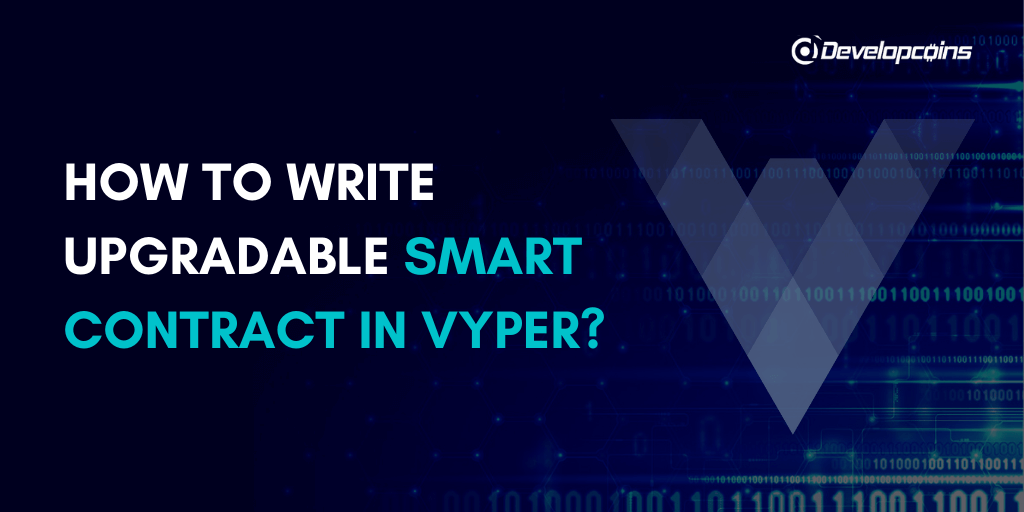 This fast-moving world consist of various sectors and people and the highly revolving and dominating one among them is business. The keyword to enhance the business and to remain stable in the market is ‘trust’.

This trust can be build by smart contracts and it can be coded using various languages based on the blockchain used. And here, we are going to the lookout about the Vyper language, which is grabbing the attention of the industry people. This vyper language is used when a smart contract is created from the Ethereum blockchain platform.

In this blog, the top-graded smart contract development company, Developcoins going to provide a brief explanation about Vyper in smart contract

Basically vyper is a python derived programming language, which is now widely used in developing the Ethereum based smart contract and run in Ethereum Virtual Machine (EVM). But, it does not completely inherit python features and its ulterior motive is a mind-blowing and tempting one for both the developers and users. That is, it claims to simple, easily understandable and it strikes much more tempting claims

Benefits of Vyper in Smart Contract

As said before, it claims and motives are one of the reasons, why vyper are used in developing Ethereum based smart contract instead of solidity. Those advantages are listed below,

These rewards are enough to show why vyper grabbed attention in the industry market, to develop a smart contract.

How Vyper Differs From Other Programming Language?

Vyper is often compared with other programming languages mainly with solidity and python because of its traits and codes but vyper has its own identity, which makes it stand out from python. They are,

These are some of the technical features of vyper language and different from other languages like OOPS, Python as well as Solidity.

Lets we can see the technical process of vyper in smart contract development. Here, is the rough layout of how the smart contract is created in vyper,

This is the general layout of generating vyper smart contract and those process details are explained briefly below,

Analyze the requirement - The very first thing in creating a smart contract is to identify the need and requirements of the clients. Based on that, it can be roughly planned and generated.

Develop the code - The very next stage after identifying and drawing the requirements is, developing the code. Smart contract in vyper is written under the section of “Source Code” in vyper.online. The codes are generated based on the following steps,

Compiling - After writing the vyper code for the smart contract, it is compiled to know the error or identify any issues about the written smart contract. This compile process is done on vyper.online.

Deploying - Once it is compiled, then it can be deployed by selecting the “deploy” option in vyper.online and conform it is deployed.

Finally, after setting the wallet, we can have a final look at the deployed contract.

Why Vyper for Smart Contract?

I hope after reading this blog, you can have an idea about vyper language and its traits made it to become a needed one to create a smart contract in vyper platform. Vyper is not generated to replace the solidity language in Ethereum, just need of strongest safety made a way for vyper to get an important place in future of Ethereum

Where and How to find the Best Vyper Smart Contract Development Services?

Planning to create a smart contract in Vyper?