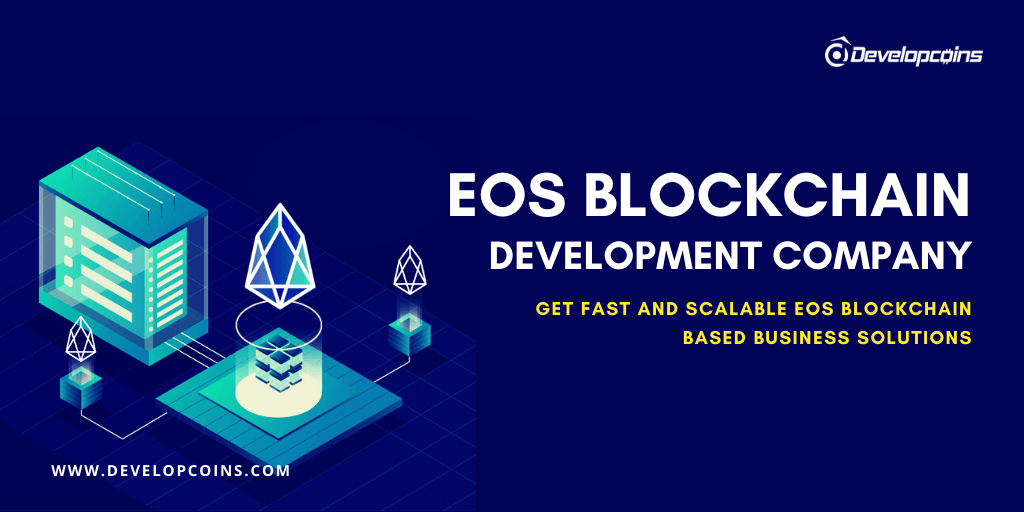 Blockchain is a vast growing technology which aid to adapt various sector in this fast-moving world. In the blockchain platform, there are different types and among them, EOS got a special place and became a trend in the market because of its unique traits.

So, here lets we can lookout about this tempting EOS blockchain development in detail and what role it plays in various fields with benefits. Such a useful portion is given by a Reputed Blockchain Development Company, Developcoins.

EOS is one of the types of blockchain platforms and becoming trending in the blockchain industry as well as various fields because of its motive. That ultimate goal of this EOS blockchain is none other than to become a decentralized operating system that can assist various sectors which are relayed on decentralized application.

The main tempting part of this EOS blockchain is,

What is more than these advantages that can benefit the industry people?

So, it becomes obvious to find the reason behind its popularity in the global blockchain market.

EOS allows to built smart contract on its platform which enhanced its advantage to the next stage in dapp developers' point of view.

When your planning to use or fork EOS blockchain, then it is wide to have some knowledge about its origin which can be an additional benefit at some point. Let’s we can look about it,

Well, the EOS blockchain is successfully launched in 2018 by ‘Block.One’.

It is an organization, which is based at Cayman Island and its CEO has involved in various blockchain sectors from 2014. The main head behind the development of EOS is Daniel Larimer who is the co-founder as well as the chief reason the BitShares and Steem.

He is also the creator of delegated proof-of-stack (DPoS) and decentralized autonomous organizations (DAO).

How Does EOS work?

Here, is how EOS works. EOS is often compared with the Ethereum blockchain process because of the similarities but EOS is considered as better one because of its traits, mainly the transaction process timing and speed i.e., known as scalability.

EOS blockchain uses DPoS consensus mechanism which can avoid the famous hacks like DAO. Let’s we can see how DPoS works,

Witness - If there are 100 people in a network and they need to verify the transaction. Then, they all considered as witnesses.

Vote - Being Blockchain is decentralized, EOS investors can get a vote from the members, who they think they can witness.

Stake - The strength of the vote is based on, how much coin a stakeholder uphold and that is known as “stack”. The more stack held, the more power the vote has.

Paid - By the above witness example, the 100 witness is to ensure the blockchain safety & security and they get paid off for it.

Backup witness - There is numerous witness waiting for their turn as a backup witness to assure the blockchain safety as well as to be earned.

Status of Witness - When a witness does not do their job properly then they can be voted to kicked off from the network, which provides a way for backup witnesses a chance.

In EOS, the transaction more efficient, cheap, fast and environment-friendly which only takes 3 seconds to process!!

To make it even more clear lets we can look through with example, if a person own 5% of EOS coin then it means that person owns 5% of the network. It means that the person has a chance to win 5% of computing power for the transaction process. This is what EOS transaction fee means.

The Benefits of EOS blockchain is outstanding while comparing it with other blockchain platforms like Ethereum and some are mentioned below,

Bitcoin is the most famous one in the market and which is nearly unbeatable. When such a thing is compared to EOS, that means only one thing, i.e., EOS also got the same place in the market. Here are few distributions between bitcoin and EOS, they are,

To make the comparison yet more simple, lets we can have look at the following flow chart…

Now, lets we can see an organization provides the outstanding EOS development services in the market.

The most important thing to note about Developcoins is, we provide complete end-to-end blockchain development solutions and all types of services related to EOS and some of them are listed, here,

Developcoins is the best token development company, whose teams of members easily adapt to the trend. This made us get a special place in the industry and also aid provide a worthy EOS crypto token to our cherished clients.

Further Reading - How to develop a smart contract on EOS blockchain?

Blockchain Fork is a technical concept and Developcoins has huge knowledge in it so that we provide quality blockchain forking services in the EOS platform as well as in other blockchain platforms too.

Nowadays, DApp grabbed a huge attraction from crypto users and also from other peoples. EOS blockchain platform becomes the right fit to develop the DApp because of its motive and trait. Such a combination can handle only the industry people like Developcoins - a dapp development company, who render a long last service in crypto and blockchain industry for both the on-shore and off-shore people.

Wish to get an end-to-end EOS Blockchain Services?? Or want to launch your token, smart contract, wallet and Dapp under EOS blockchain? Or want to fork the EOS blockchain platform? Then feel free to consult with our team of blockchain experts @ Whatsapp, Telegram

Inquiry now to have high-end EOS blockchain development services in the market!!!